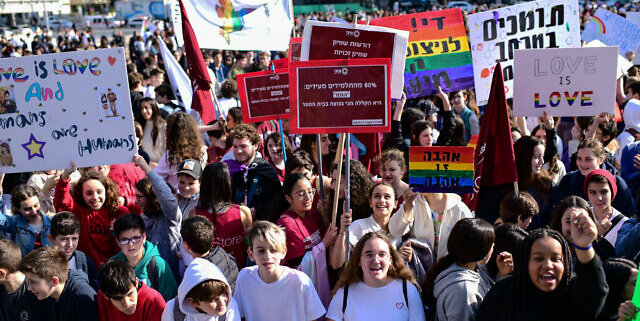 Thousands of high school students held a demonstration Wednesday protesting remarks last week by Education Minister Rafi Peretz in which he appeared to call same-sex marriage unnatural. The students and teachers rallied in Tel Aviv’s Rabin Square under the slogan “Demanding Change.” The demonstration was organized by student councils from several high schools, with buses bringing protesters to the event, Hebrew media reported. “We are not against Rafi Peretz, we are not against the ideas of anyone,” Hila Koren, 16, told told Channel 13 News, but rather against the way political leaders have expressed themselves. “When the education minister defines ‘normal’ as being heterosexual, it contradicts students’ education about tolerance and being considerate of others,” Koren explained… Complete Article HERE

The numbers speak for themselves: 56,000 students, 18 campuses and a Guinness World Record. Year after year, students dominate academic lists, crack competitive examinations, take part in many international events, rub shoulders with foreign students and delegates on a daily basis and the list of co-curricular engagements continues. At 84, City Montessori School (Lucknow) founder-manager Jagdish Gandhi leads the largest chain of private English-speaking schools in the state capital. “My vision was to prepare not just literate adults but world citizens, who, apart from being adept at material knowledge, were endowed with the virtues of humankind (peace, unity and brotherhood) and who would act as agents of social transformation,” said Gandhi. The school that he established as City Montessori School in Lucknow with just five students, today, has over 56,000 students enrolled on 18 campuses and has found place in the Guinness World Records as the World’s Largest School by Pupils in a single city.  Complete Article HERE