There is much to be concerned about in the Qatari curriculum. Most troubling is the realization that the leaders of this proud and unique country have allowed their children to be exposed for years to one of the most radical jihadi educations in the world. It is hard to conceive that there are still countries on this planet in which more than 95 percent of the workforce have no citizen rights and can be deported in a moment. Some have been treated no better than slaves. More worrying, for many, this has been until very recently, internationally legal and “acceptable.”

The recently published report:”Understanding Qatari Ambition,” fairly settles the debate about the motivation behind Qatar’s support for radicals and the resources it invests to undermine fellow Arab countries, while aggressively interfering in Europe, the US and elsewhere. They supported radicals because they were radicals. One does not expose the souls of one’s young children to a radical curriculum written by radical individuals unless one is a radical.

But the Qatari enigma remains. It revolves around the mystery of why such a small and dynamic country ends up using its endless resources and great talent to create havoc around the world. The most conspicuous example is perhaps that of Al Jazeera, which initially seemed to revolutionize Arab media but has long since lost its image as a balanced news outlet. Both the English and Arabic versions of Al Jazeera are now seen by many as a harmful and manipulative “useful tool for its Qatari political masters” (Guardian July 1, 2009) spreading antisemitic and anti-Western radicalism.

So, what can the textbooks teach us about this Qatari enigma? The curriculum appears to be in a change-mode, moving in a direction from jihadi radicalism toward open engagement with the world. To its credit, and with the exception of antisemitism and the Jewish/Israeli Other, the textbooks bravely touch upon the most sensitive issues: citizens and non-citizens, mosques in the West, slavery in the Gulf, Islam as a civilization which learned from others, tribal affiliation, enemies that are brothers, non-Arabs that helped build Islamic civilization, and discussions of democracy in a country that is, objectively, little more than a privately owned family business.

Most astounding is the open recognition of Britain’s role in securing Qatar’s existence, the presentation of Britain as saving Arab tribes from fighting against each other, Ottoman intervention, insecurity on the seas, arms trafficking and the slave trade. All this flies in the face of the pro forma anti-colonialist declarations one hears so often in the Middle East; in truth it persists even in some parts of this curriculum.

The narrative from a tenth-grade Social Studies textbook, tells us that the Al-Thani family emigrated from Najd in what is currently Saudi Arabia, and quickly gained prominence in the Qatari Peninsula. The Gulf was only just awakening after centuries of tribal infighting and colonial competition. The Al-Thanis made a small fortune in the pearl trade, which provided them with comfort and status while giving them the resources necessary to bring together the indigenous tribes. Their tools of choice were wisdom, education, poetry, religious and cultural proficiency, business savvy and political skill. Security and prosperity were accomplished by putting such skills to use—cooperating with both the Ottomans and the British, respecting both, but at times pitting one against the other in order to secure Qatar’s independence, well-being and ambitions.

A hallmark of the Qatari conduct tends to look favorably at foreign powers securing the peace in the Gulf, allowing Qataris to focus on their own interests. Much attention in this curriculum is given to the composition of Qatari national identity: Islamic, Arab and global. The peninsula seems committed to having a finger in every pie while advancing Qatari-Arab and Islamic culture worldwide. And after decades of radical Islamist teaching, Qatari students now learn the first article of the constitution includes the idea of democracy.

“Qatar is a sovereign independent Arab state. Its religion is Islam and Islamic Sharia is a major source of its legislation; its regime is democratic, its official   language is the Arabic language and the people of Qatar are from the Arab nation.”  (Social Studies, Grade 10, Vol. 1, 2019, p. 90.)

Thus, Islamic Sharia is a major source for legislation but not the only one. The constitution declares: Qatar’s “regime is democratic” And though the world (and students) know Qatar is far from democratic, its vision, as taught in school textbooks, includes democracy. But democracy, throughout history has taken many forms. Will this vision of democracy follow Western models of citizen states? Or will it seek the ancient Greek or Islamic-Medieval model of an unequal but moderate and culturally open society that includes slaves, “protected people” (dihimmis) and women who are second class citizens? One hopeful sign: The incompatibility between democracy and Islam seen in the text two years ago is no longer there.

Qatar will likely continue on its determined course to engage the world. And while the current changes seen in the curriculum point to a process of reassessment, they are partial and reversible. 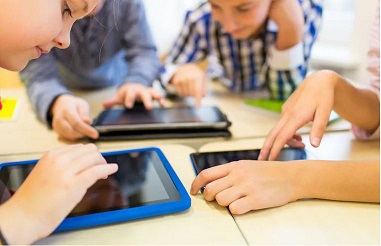 You’ve probably heard it over and over by now: The coronavirus crisis offers an opportunity to “reimagine education.” It’s become a mantra in education and business circles. For now, let’s ignore the fact that schools are having a hard enough time delivering education that has yet to be reconceived with the pandemic raging in many parts of the country. Let’s just look at the “reimagine” discussion on its own merits. What we hear in this international conversation is that “reimagining” really means adding more and more education technology into schooling, kids spending more or virtually all of their learning time on screens with programs supposedly individualized for each student. This post, by renowned master educator Andy Hargreaves, looks at the issue and explains what students are really going to need when all schools can reopen.  Complete Article HERE