Without imparting values and morals in education, human development is incomplete. Values are the guiding principles of life that contribute to all round development of an individual. Values add a good quality to life and it should also contribute to the welfare of family, the community and the nation. Philosophers, spiritual leaders and educationists of our country, all in various ways, have emphasized the role of education for “character development,” “bringing out the latent potentialities and inherent qualities” and developing an “integrated personality” for the well-being of the individual and the society at large. Whatever term we use, the importance of developing values has long been embedded in the age old traditions of India’s civilization and cultural heritage, spanning over the centuries.  Complete Article HERE 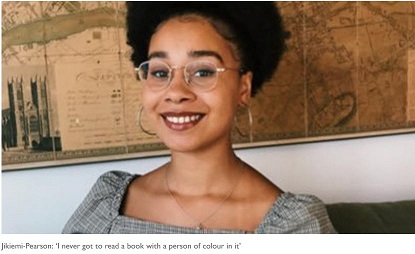 All children should learn about Britain’s role in the slave trade and the sometimes bloody history of its empire, as well as braided hair and the Windrush generation, according to young [student] campaigners whose petitions have attracted nearly 400,000 signatures. Four campaigners still at school and university are trying to have such topics made compulsory. They are backed by MPs on two Commons committees, who took evidence last week. Ministers say teachers can teach the subjects if they wish.

However, after reforms by Michael Gove when he was education secretary, schools tend to focus in GCSE history on “Hitler and the Henrys” (the Tudors), while in English literature compulsory papers feature white authors such as William Shakespeare. The Department for Education recently told schools not to teach “victim narratives.”

More than 260,000 people have signed a petition to teach Britain’s colonial past as part of the compulsory curriculum, put forward by Esmie Jikiemi-Pearson and Nell Bevan. Two other petitions, by Yacoub Yasin and Cynthia Muthoni, have more than 115,000 signatures between them.

Jikemi-Pearson told MPs: “For my English literature A-level, I was taught Jane Eyre, Sense and Sensibility and a contemporary text by an Irish author. Throughout my entire A-level and school life, I never got to read a book with a person of colour in it.

“The only character I can think of is Bertha in Jane Eyre. She is a crazed, abusive wife, so it is not a positive portrayal. Sometimes I sat in that classroom thinking, ‘Why am I even here?'”

Yasin said he had dropped GCSE history because “the only time I had ever heard history of where I was from being spoken about was the British Raj and the element of being subservient.”

Muthoni, whose petition calls for more education on diversity, gave the example of a lesson about braided hair and what it represents across different cultures.

Caroline Nokes, the Tory MP who chairs the women and equalities committee, said: “To understand racism and inequality in 2020, it’s vitally important that we understand Britain’s role in colonization and the transatlantic slave trade.”