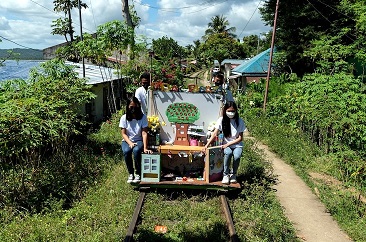 A brightly decorated wooden trolley rumbles down a little-used rail track in the southern Philippines carrying four young teachers—two on the front and two in the back—pushing it along with their feet. Kitted out with a whiteboard, colorful charts, and a stack of books, the tiny, mobile school slides along from village to village three times a week, bringing education to impoverished children near the city of Tagkawayan as the COVID-19 pandemic keeps schools shut in much of the South-East Asian archipelago. “It’s important that we do this, especially now that there is a pandemic and the children cannot do face-to-face learning,” Shaira Berdin, one of nine volunteers who operate the trolley, said in an interview as kids crouched in the grass by the railway track, thumbing through English books. Tagkawayan is a town of about 54,000 people in Quezon province, about 176 kilometers south-east of Manila…  Complete Article HERE

Behind a yellow door in an alley blanketed by snow, 25 girls sit on the floor, huddled in coats and headscarves, in front of a white board. “What are you doing?” the teacher asks in English. “I am a student!” they chant in unison. Their plastic shoes that are piled outside the door are a symbol of extraordinary courage: six months after the Taliban seized power in Kabul, crushing the dreams of women and girls by banning them from secondary education, some are fighting back. They are going to secret classes in clandestine schools. “I want to be an educated person,” says Yalda, 11, eyes shining under a scarlet scarf. “I want to be an engineer and build beautiful schools and homes in my country.” Kamila, 16, had heard stories from her mother about secret schools under the previous Taliban regime in the 1990s but never imagined she might end up in one. “I thought the world is too developed. But here we are.” She dreams of a brighter future: “I want to go to university to be an investigative lawyer, particularly helping those who can’t pay.” When the girls heard about a secret school in their area, they were overjoyed. They bravely insisted that they are not scared of being caught. “Learning is not a crime,” Fatima, 12, said… Complete Article HERE