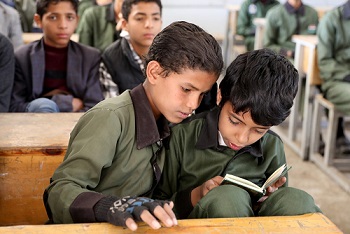 Seven years into a deadly and devastating war, thousands of Yemeni parents are using what little they have left to fight for an untold victim of the country’s conflict: their childrens’ education. Ahmed Mahdi, 50, is one of them. The father of three drives a taxi in Yemen’s Houthi rebel-held capital city of Sana’a. He was already struggling to make ends meet by 2016, a year into the conflict between the rebels and Yemen’s internationally recognized government, which is backed by a Saudi Arabia and United Arab Emirates-led coalition. That year, the government decamped from Sana’a to Aden and moved the central bank there too. After that, teachers at the public schools Mahdi’s three high-schoolers attended stopped receiving regular salaries, along with around 170,000 teachers and many more public servants in parts of the country controlled by the Houthis. Complete Article  HERE