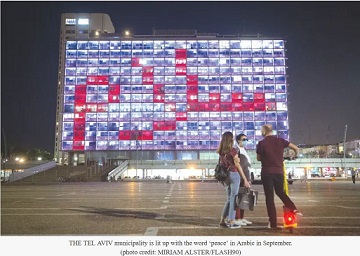 There’s no expression that better demonstrates the new peaks Arab-Israeli relations have hit in recent years than a “picture is worth a thousand words.” Just in the past month, Israeli officials and military forces were photographed alongside Arab counterparts. A major change was also seen in the diplomatic sphere, which might not have received the same amount of visual coverage, but was publicly announced, a change in and of itself. In Israel’s Declaration of Independence, the country’s founding fathers wrote: “We extend our hand to all neighboring states and their peoples in an offer of peace and good neighborliness, and appeal to them to establish bonds of cooperation and mutual help with the sovereign Jewish people settled in its own land. The State of Israel is prepared to do its share in a common effort for the advancement of the entire Middle East.” Since then, the attitude has changed in many countries, but overt cooperation—as we’ve witnessed recently—has not often been seen. The direction is right, but we’re not there yet. In the Arab street, some say that the peace with Israel is peace among governments, but not among the peoples. An Israeli citizen, for example, cannot walk freely and feel safe in the streets of Cairo or Amman. This mostly has to do with the popular view of the Israeli-Palestinian conflict. But Israelis can do more to assimilate into the region. The most basic step to change this is to start teaching Arabic at a younger age and to include spoken Arabic as part of our schools’ curricula. It is said that the entire Arabic teaching system in Israel is aimed at training young men and women ahead of possible service in the IDF’s Intelligence Corps. In this age of peace, it is time to change the direction. This is the right time for us, the people, to show that Israel is more than just an exporter of military technology. We have a lot to give, and a key step is learning the language of the region, which will help all of us communicate in the new language of peace.  Complete Editorial HERE

‘It Will Help Me to Achieve My Dream’: Helping Iraqi Girls Stay...

Artificial Intelligence Is Getting Better at Writing, and Universities Should...
Scroll to top