The Attitude to Arabs, Palestinians, Islam and Peace in Israeli Schoolbooks
March 21, 2006

Presented to the Seminar on “The Role of Textbooks in the Middle East Conflict” for Members of the European Parliament in Brussels.

This presentation is based on the findings of two surveys[i] carried out by IMPACT-SE on more than 500 school textbooks, most of them in use in the public sector[ii], the rest in use in the private Haredi (Jewish orthodox) educational networks. The reading and evaluation of these books were based upon a combination of UNESCO and IMPACT-SE criteria[iii].

Raising Awareness Against Prejudices.
An effort to raise awareness against prejudices has been noted. One book invites the pupils to compile a folder throughout the school year on the topic “What is Said, but it is not True”, with specific examples and then explanations on why these statements are manifestations of prejudices.[v] Another book states that the Arabs are like the Jews, “There are nasty people and decent people among both groups”, and they should not be labeled[vi].

References to ‘the Other’ as Human Beings First and Foremost.
Stories relating the rescue of Arabs by Jews and of Jews by Arabs are presented in readers. One textbook tells the story of a Jew who saved an Arab even though the latter was among rioters who attacked Jews in Baghdad.[vii] Another book tells the story of Abu H’amis, “the most famous seaman in Jaffa” who rescued two Jewish children.[viii] 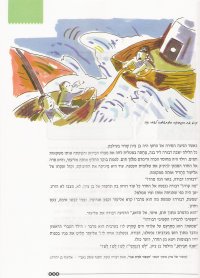 Respect for and Knowledge of the Arabs and Islam.
Basic information is provided and respect and sympathy are expressed in relation to Islam, its Prophet, its five pillars, its main holy sites.[ix] Bravery, courage and a deep sense of justice are mentioned several times as characteristic cultural traits of the Arabs.[x] Regarding their contribution to human civilization, the Arabs are presented “not simply as cultural middlemen … [but also] as creators of culture … [for example,] they were the first to discover the existence of infectious diseases … [and] to build public hospitals.”[xi] The deep attachment to the Holy Land and Jerusalem is not avoided or ignored but explicitly referred to[xii]as [for instance] in the well known poem “Jerusalem 1967” by one of the foremost contemporary Israeli poets, Yehuda Amichai.[xiii]

The legitimacy of the Palestinian national movement.
The Israeli-Palestinian conflict is now presented as a clash between two national movements, ‘the Jewish-Zionist movement’ and ‘the Arab-Palestinian movement'[xiv], hence conferring some legitimacy upon the rival movement. A textbook, recalling that the 1936-1939 clashes were then defined by the Jews as ‘disturbances’ while the Arabs called them ‘Arab Revolt’, points now to their fundamental national character.[xv]

A more Objective Presentation of the Conflict.
Embarrassing matters are no longer omitted. Textbooks and Atlases provide now data about the Arab population of Palestine in the nineteenth and the twentieth centuries.[xvi] The role of lands purchased by the Zionist movement in the confrontation between the two peoples is now addressed. The tragedy of the Palestinian refugees is no longer imputed exclusively to the Arab side, but also partly to Israel[xvii]. The content of the Oslo Accords and their political and territorial implications are presented[xviii], although admittedly the expression ‘Palestinian territories’ is rarely used and no map is provided to delimit them. The Brawer’s atlases compensated somehow for these notable shortcomings. The Arab and Palestinian point of view on the conflict does get presented.

Advocating Coexistence and Peace.
Two examples. One textbook reflecting on the meaning of symbolic acts, such as the burning of thousands of books in Germany in May 1933, describes a symbolic activity involving youngsters from a kibbutz and from a neighboring Arab village. The youngsters dig a pit in the center of their villages and remove the earth to the other pit, in a kind of soil transfusion to symbolize and illustrate coexistence and solidarity[xix].

Another textbook devoted to water as a vital resource proposes a simulation game to learn the virtues of compromise in order to reach a peaceful agreement.[xx]

In general, the Israeli textbooks embody a genuine effort to improve the pupils’ view of ‘the other’ and to take a level-headed view of the Arab-Israeli conflict. National identity is not built upon the rejection, but rather upon the acceptance, of the Palestinians’ national identity and an effort is being made to prepare for coexistence and peace with them.

It would be wise not to focus the monitoring of textbooks exclusively on the protagonists of the Arab-Israeli conflict, but to place it in a more general and less confrontational context, such as MEP Hans-Gert Poettering’s suggestion to monitor the image of ‘the other’ in European school textbooks.

This could be a proper framework for the award by the European Parliament of a prize honoring school textbooks promoting tolerance and respect of ‘the Other’ and advocating coexistence and peace.

[i] IMPACT-SE, Arabs and Palestinians in Israeli Textbooks, September 2000, 143 pages. IMPACT-SE, Arabs, Palestinians, Islam and Peace in Israeli School Textbooks, July 2002, 55 pages. These books were in use in the school years 1999-2000 and 2001-2002. They covered all the twelve grades for the following disciplines: language, literature, communication, history, geography, civics, Biblical studies, religious education and interdisciplinary subjects.

[iii] UNESCO’s criteria: Are data accurate and complete? Are illustrations, maps and graphs up-to-date and accurate? Are the achievements of others recognized? Are equal standards applied? Are political disputes presented objectively and honestly. Is wording likely to create prejudice, misapprehension? Are ideals of freedom, dignity and fraternity being advocated? Is the need for international cooperation, for the formulation of common human ideals and the advancement of the cause of peace, as well as the rule of law, emphasized? IMPACT-SE’s criteria: Does one side recognize the other? Are they accepted? Are they respected? Or are they stereotyped and prejudiced? Does education fostes peace? Does it support the peace process? Is there room for improvement?

[iv] “We [the Ishmaelites] cannot accept the Torah, it is difficult for us not to steal”, in Davar beI’to, Mikraah leKita Aleph”, Talat, 1999, pp 233-234.”There is no logical explanation for the strange vision of the flight of the Arab fellaheen … It seems that they did not strike any roots in this land, did not connect to it in any way. They dwelled on it, for hundreds of years, but did not settle on it. they were like foreigners to it, like wayfarers who rest along the way. “, in Yaldutenu 8, Yalkut Sifuti Haredi, Yeshurun, 1989, p. 350.

[vi] Rivka Motzafi, Michal Shachar What is the Connection? What is the Interpretation?Comprehension B, Reches, p.184

[xii] As the illustrationon the poster announcing this seminar, cf. Rina Ben Shachar, In OtherWords, Language, Expression and Communication, Grade 5, Masada, 1999, p. 149. This drawing is taken from an exhibition “Children Draw Jerusalem”.

[xiii] “The city plays hide-and-seek among her names: Yerushalayim, al-Quds, Salem, Jeru, Yeru, all the while Whispering her first, Jebusite name: Y’vus, Y’us, Y’vus, in the dark. She weeps with longing: Ilia Capitolina, Ilis, Ilia. She comes to any man who calls her At night, alone. But we know who comes to whom.”,in P. Shirav, Dr. B. Rubinstein et al., Variations, ninth grade reader, Tal, 1994, p. 252.

[xix] A. Warszawsli et al., Jeremiah, the Man and the Messenger, Topics in the Book of Jeremiah for Teaching and Enrichment in Secondary Schools, 2001, pp56-59

[xx] M. Dressler & R. Zuzovski, Water in the Era of Peace- Learning Unit about the Water Problem in our Region and Ways to solve it, (Hebrew), Reches, Publishing and Kibbutzim Seminar, 2000, pp.151-152.