IMPACT-SE at the International Conference on Anti-Semitism:
Anti-Semitism in Middle Eastern Schoolbooks
November 6, 2008 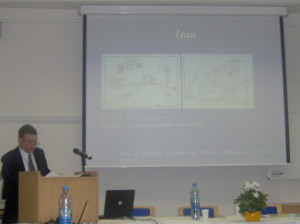 IMPACT-SE gave a presentation entitled ‘The Jews’ Image in Current Middle Eastern Schoolbooks’ at the International Conference on Anti-Semitism at the Centre of Middle Eastern Studies, Faculty of Philosophy and Arts, the University of West Bohemia in Pilsen, the Czech Republic, on November 6, 2008.

The presentation, based on a decade of research by IMPACT-SE on the schoolbooks of Egypt, Saudi Arabia, Iran, Syria and the Palestinian Authority, points to the following grave conclusions: a fierce anti-Jewish campaign is being waged in Middle Eastern curricula with clear racist and even murderous characteristics. Jews are demonized, both as a nation and as individuals, at times by using European anti-Semitic notions. A culture of hate towards the Jewish people is being created in Middle Eastern schools, and one can even say that the minds of Arab and Iranian youngsters are being set for a new Holocaust.