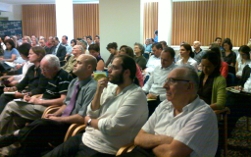 IMPACT-SE presented its findings on the Israeli schoolbooks and the schoolbooks of the Palestinian Authority at an event organized by the Israel Palestine Center for Research and Information (IPCRI) at East Jerusalem’s Ambassador Hotel.

The presentation included the findings of the ongoing research of IMPACT-SE into the schoolbooks of the Israeli school system, with an emphasis on the books of junior high and high schools of the national and national-religious sectors. Then IMPACT-SE presented the findings of its research into the Palestinian Authority schoolbooks including those studied in the 2009-2010 school year.

The panel of lecturers included an Israeli academic and a representative of the Palestinian Authority Ministry of Education. The audience of diplomats, civil society activists, journalists and academics participated in the lively question and answer sessions that followed the presentations.

Click here to listen to an interview with IMPACT-SE on IPCRI’s weekly radio show “At the Crossroads,” on All for Peace Radio (mp3, 4.6 mb, Hebrew.)