A New Path to Bridge the Gap Between Western and Muslim Countries and Help Settle the Arab Israeli Conflict:
IMPACT-SE at the international conference: “Beyond the gap between the West and the Islamic world: A French American Dialogue” – December 11-13, 2008 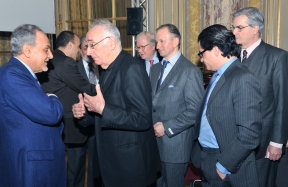 IMPACT-SE was invited to participate in the international conference “Beyond the gap between the West and the Islamic world: A French American Dialogue,” attended by researchers, civil society activists, political analysts and diplomats from Europe, the US and the Arab world and organized by the French-American Foundation, Foreign Policy and Science Po, which took place at the Académie Diplomatique Internationale in Paris on December 12-13 2008 (Program attached).

In his keynote address, Prince Turki al Faisal al Saud (Chairman of the King Faisal Center for Research and Islamic Studies, former Saudi Minister of Interior and former Saudi Ambassador to the USA and the UK), after having conversed with Dr. Manor, stressed his country’s transparency in posting its schoolbooks on the internet and the modest steps it had made toward a more tolerant curriculum, relying upon the recent IMPACT-SE Saudi Research Update. This unexpected recognition of IMPACT-SE merits coming from such a source had a tremendous effect on the whole audience, entailing interest and respect for IMPACT-SE.

IMPACT-SE then presented “A new path to bridge the gap between Western and Muslim countries and help settle the Arab Israeli conflict” through focusing on shared values and standards and enhancing their teaching and advocacy in Middle Eastern school education and worldwide, and stressed the need for complimenting the deficient monitoring by UNESCO of the implementation of the said shared values and international educational standards in the fields of peace and tolerance – a suggestion that was well-received by the participants, a number of whom expressed desire to cooperate with IMPACT-SE on this matter.