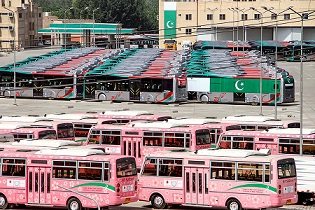 Pakistani student Mah Jabeen credits a new public bus system in her home city with saving her from being stuck at her parents’ house doing chores – or even having to get married. Thanks to the Bus Rapid Transit system in the northwestern city of Peshawar, Ms. Jabeen said she had been able to continue her master’s degree—keeping alive her dreams of becoming a botanist. “My parents had decided to stop my education … because they didn’t like me traveling in the disheveled Mazda wagons,” Ms. Jabeen said, referring to the city’s privately run minibuses while sitting on a shiny BRT bus en route to college. They relented, she said, because the new bus stop was just a few minutes from her front door and dropped her off at the university gates. Launched in 2020, the BRT has proved hugely popular among women in the ultra-conservative city, where burqas and veils are standard female dress and 90 percent of women reported feeling unsafe using public transport in a 2016 survey.  Complete Article  HERE

A Case for Educational Justice in Africa
Scroll to top