Planning for Bigotry in Schools?

The parents at the Israeli national religious schools who objected to daily planners given to their children containing inflammatory messages, are to be lauded. They called out the bigotry being pushed onto their children unknowingly and through the back gate. Because of their forthrightness, an investigation by the Israeli Ministry of Education is now in progress.

While IMPACT-se has not reviewed the planners, local media quoted parents as being troubled that they ignored Judaism’s universal values and respect for the Other. They cite a cartoon of a conversation between “Jacob the Jew” and “Jack the Goy” [gentile]; the former argues that “a human with Torah and one without are totally not the same, even if they s 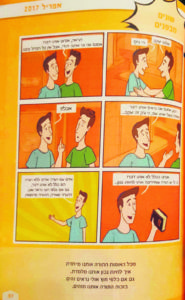 eem to look alike.” The planner includes anti-Arab stereotyping, warning against someone named “Mustafa” spying on behalf of terrorists. One mother worried: “It is quite conspicuous that most figures are males. Girls are not shown as having the option to learn Torah.”

The daily planners include radical political messages that do not belong within the school system. Effectively, they deny the murder of former Israeli Prime Minister Yitzhak Rabin by a zealot in 1995 by removing the memorial date in the diary. They also call for a return of Jews to Gaza.

The planners in question should have received Ministry of Education approval before they were allowed into the schools. Yet they were distributed without such permission. “Chiyuch LeArachim” [Smile For Principles], the NGO behind the planners, understood, like many other politicized organizations, that they could get into schools and around textbook scrutiny by using magazines, planners and the like.

Of course, radical views that are not a call to incitement per se exist in the discourse of democratic societies. But there is no place for them in the school system. Schools are a crucial component to achieving the tolerant and open-minded societies of the future and by far one of the most powerful tools to puncture extremist influences. They can also be where negative influences such as skewed historical narratives, hatred of others, gender inequalities, radicalization and political violence take root.

The planners fail to meet UNESCO peace & tolerance standards which include:

RESPECT (promoting tolerance, understanding and respect toward the Other, his or her culture, achievements, values and way of life); INDIVIDUAL OTHER (fostering personal attachment toward the Other as an individual and recognizing his or her desire to be familiar, loved and appreciated); NO HATE (free of wording, imagery and ideologies likely to create prejudices, misconceptions, stereotypes, misunderstandings, mistrust, racial hatred, religious bigotry and national hatred, as well as any other form of hatred or contempt for other groups or peoples); PEACE-MAKING and UNBIASED INFORMATION (educational materials should be up-to-date, accurate, complete, balanced and unprejudiced, and use equal standards to promote mutual knowledge and understanding between different peoples); GENDER (fostering equality and mutual respect between women and men and refraining from stereotyped gender roles).

There are elements in Israeli society that are frustrated by the country’s curriculum, which identifies peace as the ultimate goal, acknowledges a Palestinian presence pre-1948 and recognizes the physical presence of Palestinians in maps and other media. It talks of the “Nakba” and of Palestinian suffering.

The Israeli public, whether they choose to send their children to state or state religious schools, schools where lessons are taught in Arabic for the Arab public, Haredi schools or any of the plethora of small, independent initiatives, are all reliant on a core curriculum running through all these institutions that teaches all children in Israel peace, tolerance and respect.

According to a spokesperson from the education ministry: “The ministry had nothing to do with the [production of the] daily planners, and if a purchase was indeed made, it was part of voluntary services offered. Be that as it may, in light of the questions on the matter, the ministry will look into the issue, including examining the daily planner’s contents.”

The ministry has much to be proud of in crafting a national curriculum that holds the line for peace and tolerance in the midst of conflict, terror and internal debate. Now they need to pay scrupulous attention to inflammatory materials with any political agenda, getting into schools in Israel by sneaking in through the back gate.

The Al-Aqsa Fire—The Dangers of Manipulative Education: What Can Be Done

Daniel Taub in the Jerusalem Post — Palestinians’ Future is Not...
Scroll to top