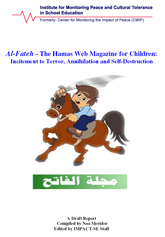 Hamas Web Magazine for Children Incites to Terror, Annihilation and Self-Destruction
By IMPACT-se – May 2009 Update

IMPACT-se recently completed its report on Al-Fateh (http://al-fateh.net), the Hamas web magazine for Children, which serves as its internet educational instrument, supports its ideology and terrorist activities, and serves as a platform for Hamas propaganda and indoctrination, especially of Palestinian, and more generally, Arab and Muslim, children. Politically, the website’s consistent message is a call for the destruction of Israel and the establishment of an Islamic state in its stead, and an armed struggle of violence and terror against all who are defined as the enemies of Islam, including the West in general. The site indoctrinates children to adopt the concepts of jihad and martyrdom and aspire to become not just fighters but suicidal martyrs, effectively preparing them to serve as the next generation of sacrificial instruments in the war of terror and annihilation waged by Hamas.