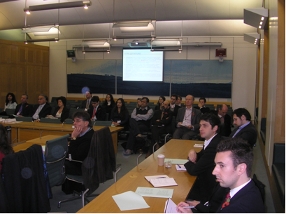 On November 11, 2009, as part of IMPACT-SE’s European tour, IMPACT-SE, London-based journalist and activist Simon Barrett and Muslim scholar Sheikh Dr. Muhammad Al-Hussaini of Scriptural Reasoning attended a briefing at the House of Commons, organized by Barrettt and moderated by MP Patrick Mercer, Chairman of the Sub-Committee on Counter-Terrorism.

IMPACT-SE then presented its findings on Hamas’ educational approach as manifested in the Hamas’ Web Magazine for Children Al-Fateh (pdf, 1.57 mb – see in French as well, pdf, 2 mb) and its implications for peace in the Middle East and the future of the children of Palestine and Israel, as well as for the future of British Muslim children exposed to the website (presentation: pdf, 1.59 mb).

The presentations were followed by a lively question and answer session. See: 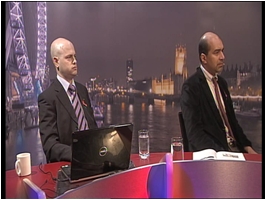 IMPACT-SE and Sheikh Dr. Al-Hussaini were subsequently interviewed by Simon Barrettt on “Live at Nine,” the live studio broadcast of Genesis TV, in which they presented their respective findings and answered questions from viewers: