On November 18, 2009, as part of IMPACT-SE’s European tour, IMPACT-SE presented at the European Parliament the findings of its research on the Tunisian schoolbooks at a November 18 public hearing entitled “The Challenges of Education for Peace & Tolerance & the Attitude towards Diversity – the Tunisian Model & the Role of the EU.”
The hearing was organized by the Alliance of Liberals and Democrats for Europe and hosted by ALDE Members of the European Parliament Ramona Nicole Manescu and Hannu Takkula. IMPACT-SE presented the Tunisian educational approach (presentation: pdf, 1.88 mb) which advocates peace, tolerance, acceptance and dialog with the “other” as a potential model for other Arab and Muslim countries.

IMPACT-SE’ presentation was followed by that of Dr. Tawfik Hamid (http://www.tawfikhamid.com) who introduced his innovative educational model, combining use of advanced cognitive psychology tactics, encouragement of critical thinking and utilization of theological educational support to promote values of peace, tolerance and human rights and to counter radical teaching among young Muslims.

Tunisian scholars Prof. Muhammad Khlifi and Prof. Muhammad Mahjoub, at the behest of the Tunisian Embassy, then presented the guiding principles of the Tunisian education system, followed by a brief talk by Tomas Sandell of the European Coalition for Israel on the importance of the role of the EU in tightening oversight and eligibility requirements so that European funding would be granted only to those NGOs that truly promote education for peace, tolerance and dialog. See: http://www.neurope.eu/articles/Middle-Eastern-academics-speak-to-MEPs-about-the-importance-of-education/97937.php.

For an audio recording of the public hearing, click below: 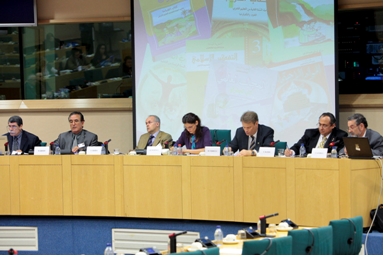 For more pictures of the event, see: http://www.alde.eu/en/photo/2009/photos-alde-hearing-challenge-of-education.