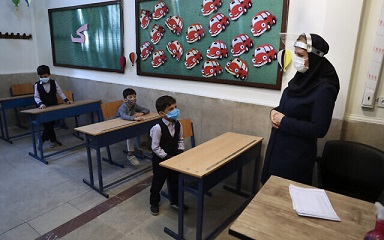 Iranian schoolkids are studying antisemitism, hatred and conspiratorial material in their textbooks, including a theory that Western media hyped up the COVID-19 pandemic to thwart large-scale attendance at last year’s celebration of the Iranian revolution, according to a comprehensive study published by the Anti-Defamation League (ADL) Thursday. The ADL said its report, “Incitement: Antisemitism and Violence in Iran’s Current State Textbooks,” is the first comprehensive study of antisemitism, intolerance and extremism in the official Iranian school curriculum in nearly half a decade. The study was published on the 42nd anniversary of the 1979 revolution that saw the rise of the current autocratic, conservative Islamic regime which has long threatened to destroy Israel and which is now battling US sanctions imposed to curb its nuclear activity. Last year, in response to the global pandemic, Tehran updated school textbooks to include a conspiracy theory alleging that Western media exaggerated the coronavirus to drive down turnout at crowded ceremonies for the regime’s 41st anniversary, said report author David Weinberg.  Complete Article HERE