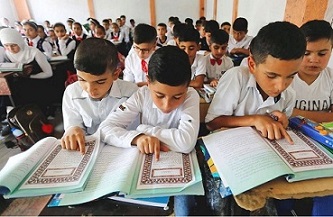 God, says the Qur’an, chose Arabic for his revelation because it is easy to understand. But many of the world’s 470 million Arabic-speakers beg to differ. According to a report by the World Bank, almost 60 percent of ten-year-olds in Arabic-speaking countries (and Iran) struggle to read and understand a basic text. Despite decades of investment in education, the Middle East and north Africa still suffer from what the report calls “learning poverty.” “School systems don’t see the importance of engaging kids in reading—or don’t know how,” says Hanada Taha-Thomure, one of the authors. “It creates a gap between children and their language. Many can’t read or write an essay.” The root of the problem is bad teaching. Arabic lessons are dull and focus on fiddly grammar. Classrooms often have no printed material. Few schools have libraries. Teachers tend to lack “sufficient mastery of the language itself,” says the report. In universities across the region, Arabic departments, along with religious studies ones, attract students with the lowest grades. Arab education ministries are waking up to the problem. Egypt has developed a trove of online material to bypass the traditionalists. The UAE has begun fitting classrooms with “reading corners.”….  Complete Article  HERE

As Most Students Return to Classrooms, Schools in Some Countries Have Been Shuttered...