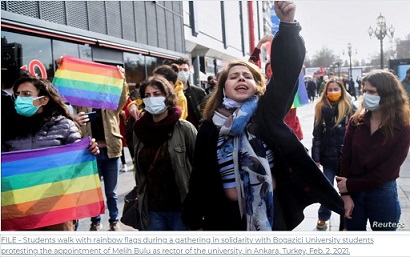 Authorities in Turkey made dozens of new arrests in cities across the country Thursday, after downplaying international criticism—including U.S. condemnation—of President Recep Tayyip Erdogan’s crackdown on university student rallies. According to police, about 600 people have been detained since January 4 as protests spread in the capital, Ankara, and in Istanbul. Erdogan has accused student demonstrators of being terrorists for protesting his appointment of a new rector at Bogazici University in Istanbul, one of the country’s top schools of higher education. For over a month, students, faculty members and alumni of Bogazici University have protested Erdogan’s appointment of Turkish politician and academic Melih Bulu, demanding an election to choose a rector from the university’s own faculty. Bulu holds a doctorate from Bogazici’s business management program but has never been a full-time academic at the university. Critics accused him of plagiarism in his dissertation and published articles and called for his resignation. Bulu has denied those accusations. His involvement in politics also stirred controversy over his appointment, since he once ran for parliament as a candidate for Erdogan’s ruling Justice and Development Party (AKP).  Complete Article HERE

On International Day of Education 3.7 Million Afghan Children Remain Out of...