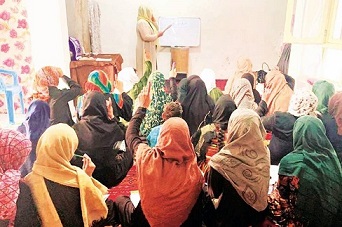 The underground school in suburban Kabul began in July this year, one of 50 set up by women’s rights activists, months after the Taliban regime in Afghanistan disallowed school for girls studying in classes 7 and above. In the Taliban’s interpretation of Islam, there is no sawaab in educating girls. While women have so far not been stopped from going to universities—men and women go on separate days—given the ban on schooling, there will be no new admissions. In the class of 26 are women of varying ages, including a woman in her thirties, who had to drop out of school in her fourth grade during the first Taliban regime from 1996 to 2001, and her daughter, who should have started Class 8 in March this year but is now out of school—two generations of women who know first-hand what it is to have dreams cut short, what it is for women and girls to live under the Taliban’s boots. “I could never go back to school after that. I come here because it is a chance to relearn how to write and read Dari and be able to do some sums, so that I can teach my children,” says the mother.  Complete Article  HERE

‘Frightening Antisemitic Abuse is on the Rise in Australian Schools’...
Scroll to top