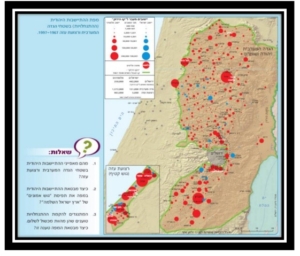 This IMPACT-se report offers an insight into major themes relating to Arabs and Palestinians in government-approved, Hebrew-language Israeli school textbooks covering civics, geography, Hebrew studies, history, homeland, society and civics, Israel studies, Jewish thought, and Jewish-Israeli culture. The research explores how specific lessons, images and exercises portray and shape attitudes toward Palestinians and Arabs from various backgrounds within Israeli society and the greater region. It evaluates the presentation of the Arab-Israeli and Israeli-Palestinian conflicts, the peace process, and Arab and Palestinian Other—living either as citizens of Israel, in Jerusalem, the West Bank, the Gaza Strip, and elsewhere. This analysis looks at 107 textbooks taught at state and state-religious schools approved by the Israeli Ministry of Education for the 2022–23 academic year. These include the entire corpus of the eight state-approved civics textbooks (from which schools could choose), as well as the majority of history textbooks dealing with the periods of the Arab-Israeli conflict. In doing so, this report focuses on six thematic categories: “Peace Education”, “The Palestinian Experience”, ”Diversity and Democratic Values”, “Self-Reflection, Violence and Injustice”, “Har Bracha: Perspective from the West Bank,” and “Cartography.”  Report 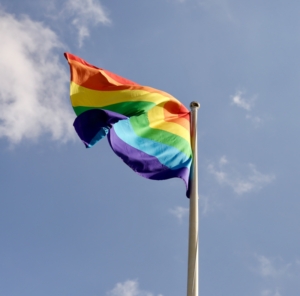 This brief on LGBT education in Israel examines two of the nine areas IMPACT-se reviews during textbook analysis – ‘Gender Identity and Representation,’ and ‘Sexual Orientation.’ The teaching of LGBT materials is afforded lesser importance in the curriculum: such content is generally not included in textbooks, and is instead provided as online supplementary materials. Nonetheless, education on LGBT identity is provided in the Ministry of Education-approved, mandatory “Life Skills” Program, which advocates for acceptance, tolerance, empathy, and responsibility toward the Other. This is available on the Ministry of Education website, is mandatory, and has been prepared in collaboration with an LGBTQ non-profit organization. The LGBT community is also referenced in one Ministry of Education Civics textbook, Being Citizens in Israel, in the context of the Pride Parade, and in an explanation of prohibited discrimination.  Report 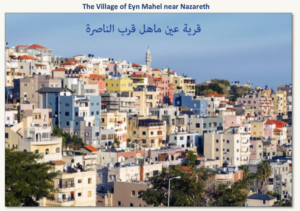 MPACT-se has released a report on the Arab National Minority Curriculum in Israel, which includes Arab Muslim and Christian, Druze, Bedouin, and Circassian curricula. The report analyzes 108 textbooks across grades 1-12. Israel’s Arab Education program is a national minority curriculum in a conflict area. The Arabs of Israel are a large minority, but form part of the large Sunni Arab majority of the region. While textbooks contain contradictions, they nevertheless successfully educate for a social and economic integration of the Arab minority within the State of Israel, while fostering Arab and Palestinian cultures. Students learn important linguistic and cultural tools for success in Israel, the region and world. The curriculum’s perspective is from an Arab-Palestinian standpoint—Arab culture, history, tradition, connection to the land, and resentment and struggle with Israel. Yet there is evidence throughout that students benefit from a prosperous, peaceful and happy integration with their Jewish neighbors, so much so, that in some civic textbooks, Israel is presented as the homeland.  Report

Peace and Conflict in Israeli State-Approved Textbooks: 2000–2018
The article describes the peace and conflict educational approaches found in the Jewish-Israeli c 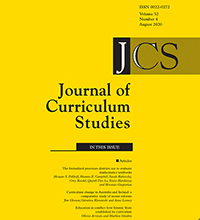 urricula between the years 2000–2017, and extracts the dominant themes and messages towards Muslim, Arab and Palestinian “others.” The study follows 123 textbooks recommended by the Israeli Ministry of Education for grades 7–12 of the Jewish state and state-religious sectors for the 2000–19 academic years. The academic subjects or disciplines represented in the  study include history, geography, civics (Jewish) religious studies, and Hebrew language and literature studies. Study findings indicate that current Israeli textbooks do not contain any overt racism or incitement against Palestinians. However, ethnocentric perceptions and victim mentality are two themes that still dominate curricular discourse and are counterproductive to peace education goals. Additionally, the paucity of Palestinian narratives is another potential hurdle to achieving peace education goals.

Haredi Textbooks in Israel: Reinforcing the Barricades
An IMPACT-se Report — May 2017 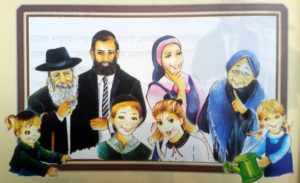 Textbooks used in the Haredi curricula promote a unique and separate cultural identity while generally keeping recognition and contact with mainstream Israeli culture to a minimum. While it fails to meet all of the UNESCO standards, Haredi education as a whole offers some unique characteristics and advantages that are worthwhile examining, with certain aspects potentially even offering a model for other education systems.
Full Report (pdf, 4.3 mb)

Palestinians in Israeli Textbooks: 2016 Update
By IMPACT-se – Update for 2016

This timely report updates Impact’s analysis of the current Israeli educational curriculum, particularly as relates to the Palestinian people and the Israeli-Palestinian peace process. It is based on the

review of 123 state and state-religious textbooks, which were approved and recommended by the Israeli Ministry of Education through the 2017 school year.

Peace, Tolerance and the Palestinian “Other” in Israeli Textbooks
By IMPACT-SE – Update for 2009-2012

This study analyzes the attitude of Israel’s education system towards the Palestinian people and nationality, and towards the Israeli-Palestinian peace process. It is based on the review of 149 state and state-religious textbooks, which were approved and recommended by the Israeli Ministry of Education for 2009-2012. 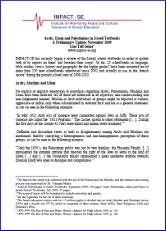 IMPACT-SE has recently started a review of Israeli schoolbooks used in school year 2009-2010. It has discovered that the encouraging fundamentals found in the previous report persisted and even strengthened, namely: regarding the “other” as first and foremost a human being; overcoming suspicion, hatred and prejudices; knowing and respecting Islam and Arabs; admitting the legitimacy of the rival national movement and; presenting conflict in a balanced way. Despite deterioration of Palestinian-Israeli relations after the second Intifada and the deep disenchantment with the peace process among Palestinians, peace is still considered something that might and should happen one day, and is presented as obviously positive and worthwhile for all sides.

Arabs, Islam and Palestinians in Israeli Textbooks
By IMPACT-se — Update for 2000–02

Positive trends noted in the earlier report on Israeli textbooks such as, description of the conflict, presentation of Islam and education to tolerance, have been strengthened. 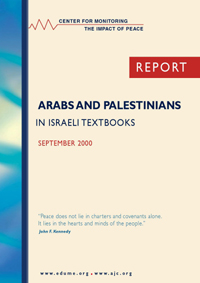 Arabs, Islam and Palestinians in Israeli Textbooks
By IMPACT-se — September 2000

This study reviewed 360 Israeli schoolbooks, from six disciplines, that were used in three different educational streams of the Israeli school system in the school year, 1999–2000.